Posted by crataegus on October 14, 2018 in Uncategorized |4 Comments

Every year we invite a talented bonsai artist to talk in the studio here for our summer Crataegus Bonsai Seminar, and this year it was filled to overflowing with more than 30 people in a space that was built to teach 6. We were well rewarded for the sardining, however, as Joe Harris III gave us a remarkable 5-hour lesson in the history, cultivars, propagation, care, and styling of Satsuki Azaleas.

Few can claim Joe’s background—he studied for four years at Kanuma Bonsai Park in Kanuma, Japan under Mr. Hashimoto and dealt with a terrific number of azaleas while there, as well as other specialties like Japanese White Pine. Since then Joe has been in the upper management of the industry-leading Iseli Nursery here in western Oregon, and so he brings a wealth of knowledge from disparate fields to the table. It was an illuminating talk—our thanks to Joe for sharing his expertise and wry humor. 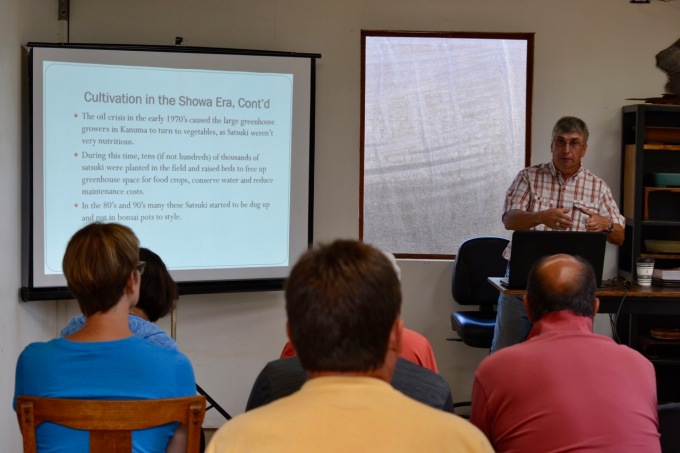 Here’s a few rare facts from Joe that surprised the audience: