When Is It OK To Have Wire Biting In?

Posted by crataegus on August 25, 2017 in Uncategorized |9 Comments

Too much of a good thing can be sad. Just enough is useful. Too little and it doesn’t work. For wiring, we want the middle one, just enough.

Blogs are wonderful for making grand statements that have marginal utility, unhinged to useful reality. Hopefully photos will clarify this commentary about what is just enough…

The wire has been on this Ponderosa branch (above) for 6 years and still hasn’t begun biting in. It should be left there until it does, or the branch will have a memory and spring back. 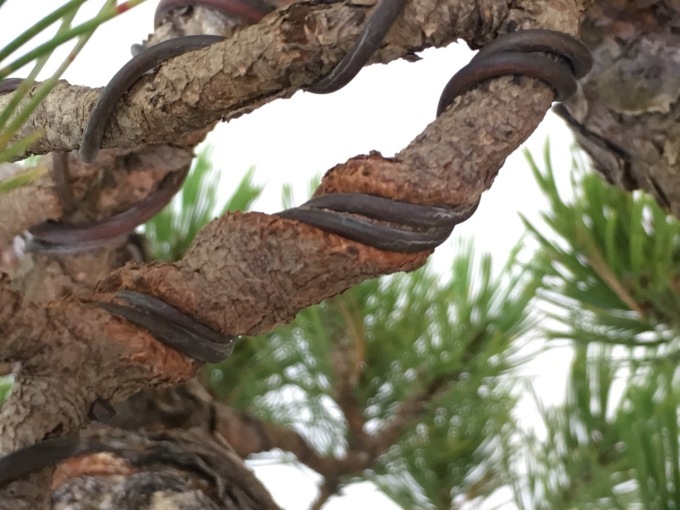 This pine has wire biting in badly that should have been taken off earlier in the year.

And this pine has wire that is about right. (Sound like the story of the three bears?) It should be taken off now. The moderate amount of biting in will help hold the branch in place, so that any rewiring that is done may be done with smaller wire.

Deciduous trees are often displayed naked without leaves, and any wire scars on them are immediately obvious. Older deciduous trees are normally trained without wire to avoid scars. On conifer branches, bark eventually forms which helps hide wire scars, and they also have foliage year round so scars are less obvious. For a conifer, ‘just enough to be useful’ is wire biting into the branch just a bit. Sounds scandalous doesn’t it…but taking wire off too soon will just waste the work.