Juniper Live Veins and How They Move…

Posted by crataegus on November 11, 2015 in Uncategorized |16 Comments

…or get smaller, to be more accurate.

When we style a juniper, very often the live vein changes in size. It’s normally an adjustment to foliage loss, or branch loss, or even root loss, all which happen in the early years of initial work on a juniper.

Most commonly, the sides of the vein will shrink, so that the vein will become narrower. Except on the very youngest of trees, a vein will never become wider. (This reluctance to cover a wound is why we don’t cut off a large branch cleanly to the trunk, as one might on a pine or maple, expecting it to callus and close up. A juniper won’t do that, so we make a jin).

Although it won’t widen, over time the live vein will grow more bulbous, growing out from the trunk. The top of this juniper shows an old live vein that has a rounded character to it. This is a very old live vein. The deadwood on either side died many years ago, probably decades ago in the mountains.

With this juniper we got lucky. The vein diminished to the point that it unexpectedly added complexity. It added a spiral and became more dramatic. On this Rocky Mountain Juniper, I noticed that the bark was getting loose in one area, and after investigating discovered that the live vein had retreated after the tree was styled years ago. There was a fair bit of dead bark that could be removed. I did that, and cleaned up the exposed deadwood with sandpaper. Now the tree looks quite a bit jazzier than it was…

A spiraling live vein on a Rocky Mountain Juniper. On investigation it was found that the live vein had retreated, and there was some dead bark to remove. The reddish areas are the dead areas—compare with the photo below, after removing the dead bark. (‘Dead bark’ is an odd set of words; all bark is dead, technically. What I meant was that there was no live cambium or phloem underneath the bark).

Cleaning the bark off reveals the true nature of the veining. 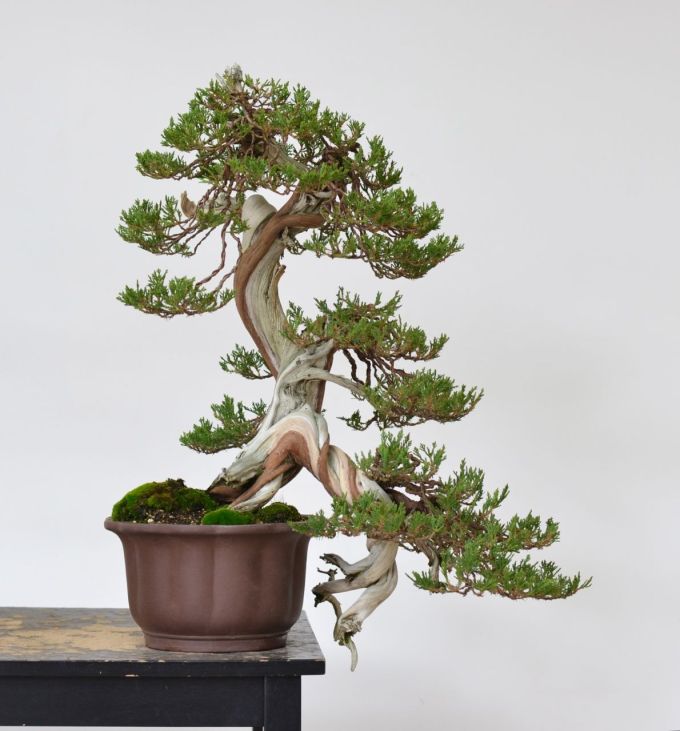 The whole tree, 28″ / 71 cm. This tree actually has two live veins going into the soil, which supply two parts of the tree. The cascading branch has one vein, and the upright trunk has another. Tree was collected by Randy Knight about 8 years ago. This Rocky has finer foliage than many, also greener and more like Itoigawa, than most Rockies. There is so much variability in juniper foliage that it makes it quite exciting and full of personality from tree to tree.