Posted by crataegus on April 17, 2015 in Uncategorized |14 Comments

There are a lot of things we might say about watering bonsai. I’ve tried a few times on this blog to mention some of them. Some are hard to make sense of in words, but as ever I’m willing to try. This one is about watering recently repotted trees.

At post-repotting time we need to be awake to one change-up, and that is that the interior soil mass (the part that was returned to the pot) may dry out much faster than you’d think. 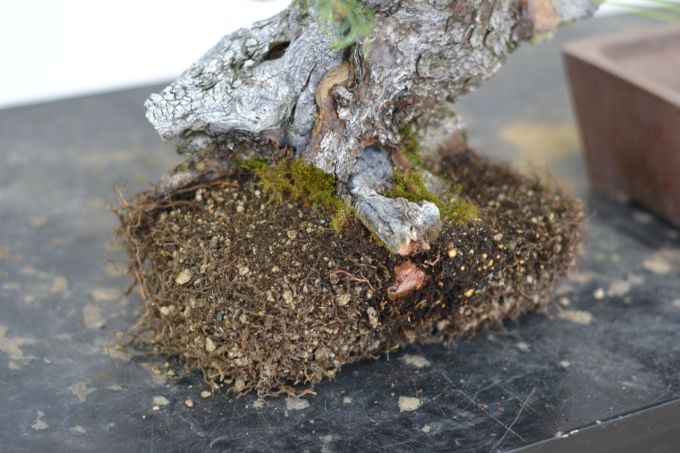 This pine is beginning to develop a solid mass of soil and roots, and this is the area that we’ll take our moisture ‘read’ from when deciding when to water. When dry, it will look very light colored compared to the surrounding new soil.

If you cut all the fine roots off in repotting your tree, shame on you, but that’s a different issue. For the sake of this example, we’ll assume you have fine roots, and that we’re talking only about established trees with a solid mass of roots and soil. There are myriad other situations, such as proto-root balls with stringy roots that don’t yet hold soil together, but these photos show what we’re hoping for and working towards. 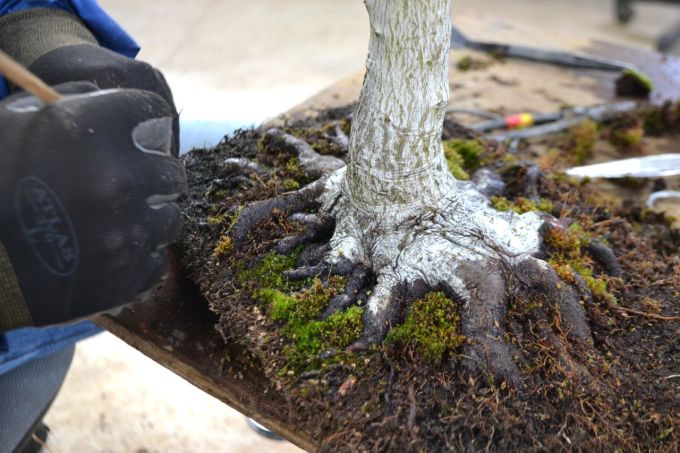 A deciduous tree with a very mature ‘loaf’ of roots and soil that is returned to the pot, to be surrounded with new soil.

Especially with conifers, we usually don’t prune any branches at the same time as repotting. And so…

This interior mass we’re talking about, this is the area you should watch to determine when to water. Ignore, for a few weeks at least, taking your moisture reading from the new soil you’ve settled in around the original mass. There’s no active roots in the new soil yet and it won’t be drying out fast. 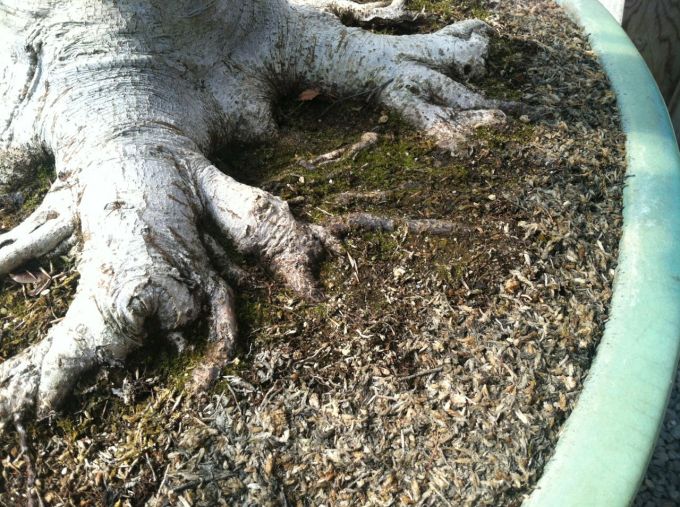 Freshly repotted beech, showing the two zones of soil—the older soil that is a bit green and mossy near the roots, and the newer soil that is gray (sphagnum moss covering new soil, actually). The older soil will be our indicator when to water, and is not covered with new soil on top but is exposed.

In many cases you’ll be watering when the new soil is still moist. So we ignore that area. Again, I’m only commenting on watering repotting bonsai with more mature root structures.

Here’s a previous post about watering that might spread a broader net around the issue of watering: