Posted by crataegus on September 11, 2014 in Before and after |18 Comments

Ponderosa is a controversial North American tree. Mostly the debates swirl around the long needles, and their size being a problem with bonsai. I’m of two minds with this. For one, Ponderosa ramifies rather well over time, and needle length comes down pretty good. My misgivings are that for very small trees, ponderosa foliage doesn’t seem well suited. But, for a modest sized tree and larger, we have a really rough and rugged, really quite exciting, pine character. It’s almost the ultimate pine, in terms of wild ‘piney’ feeling.

This ponderosa is modest in size, 26″. That’s enough size to get beyond the long needles, and then it’s also a bunjin, which is one of the best applications for the species. Needle size will also go down a lot over time.

Before I bought the tree, it had been left to grow for some years without any kind of management. Ponderosa will quickly revert to a strong primary bud and weaken anything on the interior when this happens. A few of the branches were really weak. But there were also small buds everywhere, waiting to push.

And that’s the background for this tree… I’ll fill in how we reset the energy and the styling in the photos: 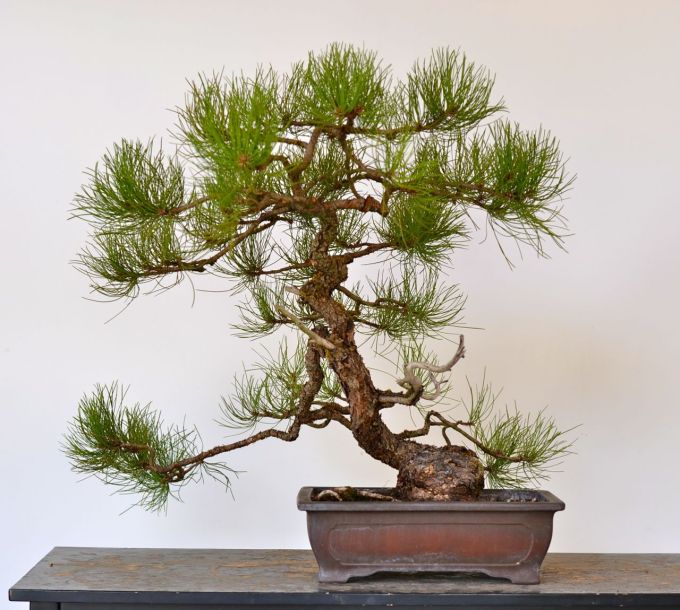 The tree as purchased. Been in a pot a long time. Strong exterior shoots, weak interior…the usual pine issues when left fallow for a while. 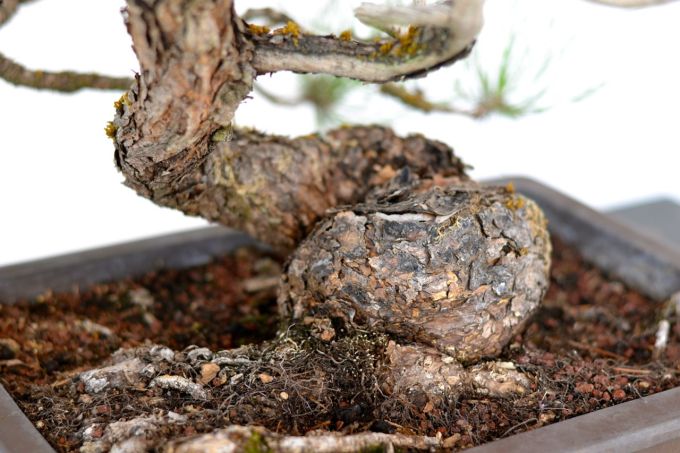 One of the intriguing parts of this tree, a burly base that looks as if it’s coiling to spring off the pot.

The inclination and front that had the most promise. 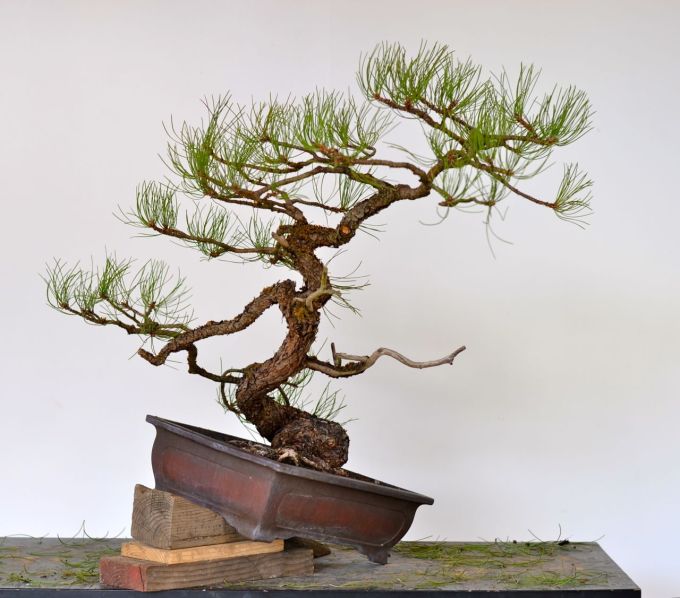 After branch and shoot removal, and trimming needles in stronger areas.

Bobby and I were working on this ponderosa while Seasonal students had their own project. Here we took a break to discuss what the heck we were doing with this pine, and why. What THEY were doing will be featured in next week’s post—the styling of a limber pine.

Our final tree. Might go on an interesting piece of rock this coming spring. What I like about this tree is how the trunk meanders all over the place to end at a relatively unlikely location. Leaning tree. Pines are the great individualists of the bonsai world. One of the big decisions of the styling was leaving that low left branch, which in usual bunjin styling would be removed. That would have made a much simpler, easier to appreciate tree. But leaving it adds a lot of tension, counter-pull, and character, which is a pine feeling. It’s tempting to make our collected trees too vanilla and easy on the eyes. They lose a lot of their soul if we do.