Posted by crataegus on February 16, 2014 in Uncategorized |20 Comments

I’m writing this in the snow-socked city of Nagano, 6 hours after my plane left from Narita Airport on the other side of Honshu. Waved vaguely in the direction of my apprentice Bobby Curttright, who enviously left Shinji Suzuki’s garden several days before I did and had a nice time visiting museums in slushy, but not ground-to-a-halt, Tokyo. Here we had over two feet of snow in less than 24 hours, much more in the mountains, and stopping the Shinkansen, bullet train, in its tracks.

This is why they held the winter Olympics here in 1998: Snow is likely.

But there is no snow in this post… at this point in our trip, we had no idea what was coming. Come to think of it, there are no photos of the Kokufu show either, where photos are not allowed (we have to wait for the book…). Only the middle word in the title is represented here, Friends. Along with a few not so shabby bonsai. 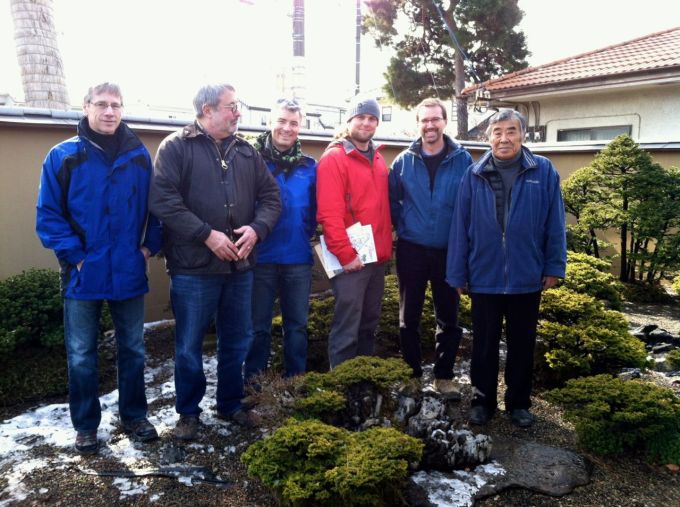 Our entire entourage that went to Omiya Bonsai Village: From the left, Grant, Howard, Peter, Bobby, and me at Mr. Kato’s multi-generation garden, Mansei-en. 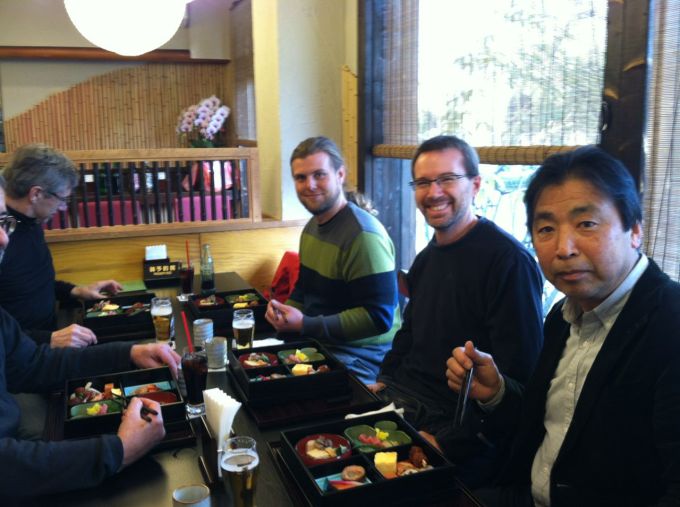 Eating lunch with Mr. Nakamisu, who guided our tour and three days earlier had opened this restaurant. Marvelous! Delicious. If you’re in Omiya, don’t miss it- (someone from the group, please post a comment with the name of it, I don’t have it handy and my memory, which is like a sieve, is working well.) 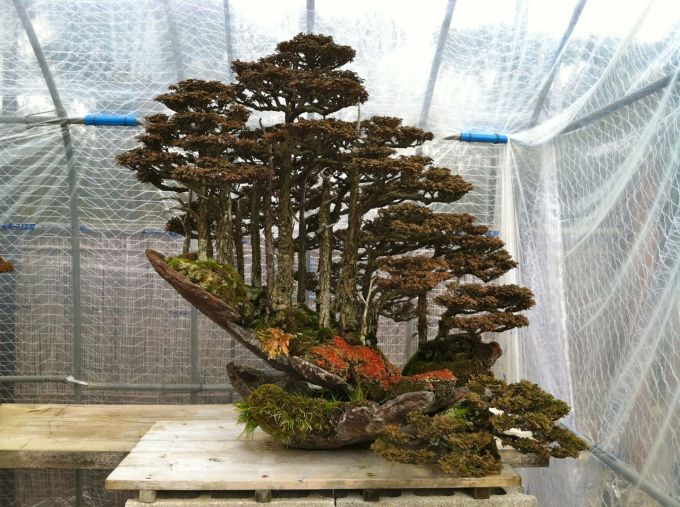 One of my favorite bonsai by Mr. Kimura, a Hinoki forest. His spare garden makes his memorable trees stand out. My teacher’s son is studying there, and it was good to see him briefly. 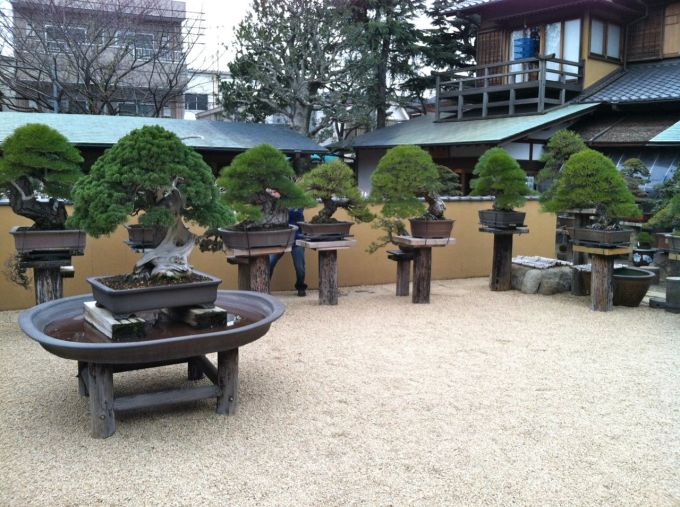 Our first day concluded with the astonishing garden of Mr. Kobayashi, where Bobby bought a 300 year old kowatari pot that we were all drooling over. The drool adds to the patina. 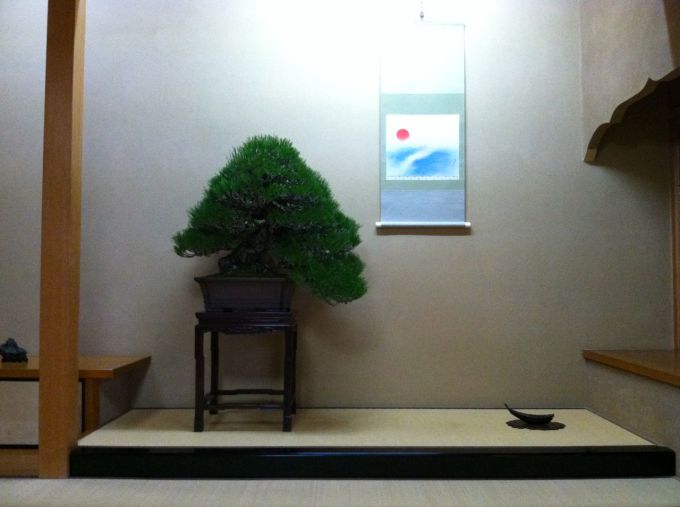 A sadly dreadful shot of one of Mr. Kobayashi’s indoor tokonoma rooms. He is one of the reigning display masters in Japan, my teacher is another one. 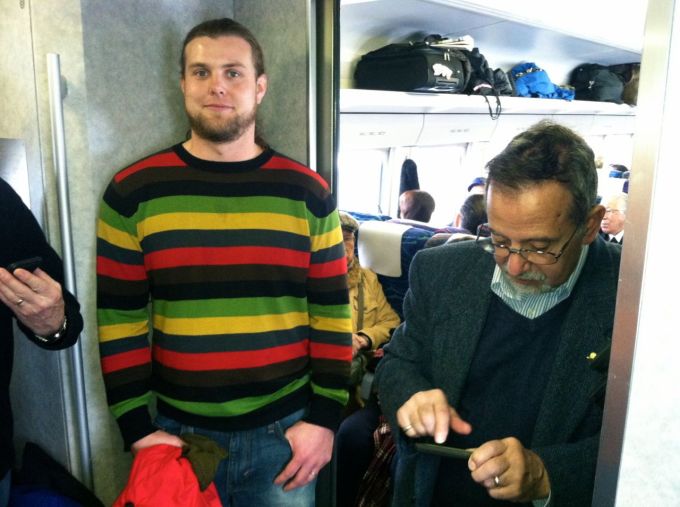 Bobby and Bill Valavanis on the Shinkansen to Obuse, Nagano Prefecture, the village where my teacher has his garden. It was mildly treacherous getting there, the beginning of the snowy week to come, and Bill and Bobby’s first trip there. Welcome to Nagano: Wear your fleeces, woolens, silk underwear… 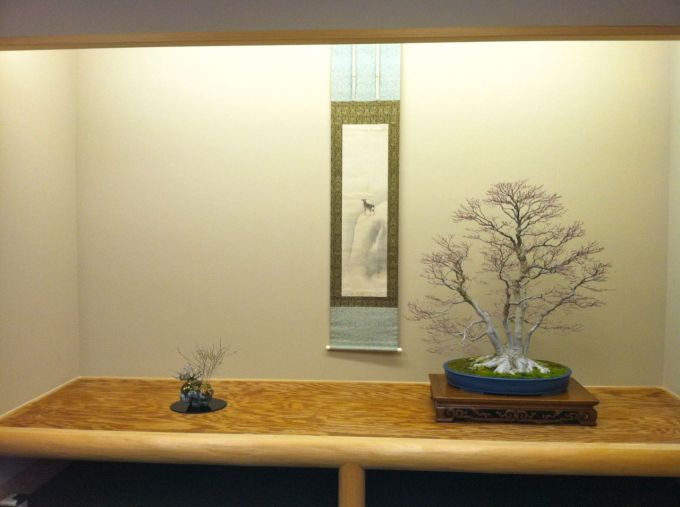 Tokonoma at Shinji Suzuki’s, with a Japanese maple, a scroll of a deer in the snow, and a budding accent offering a hint of spring. 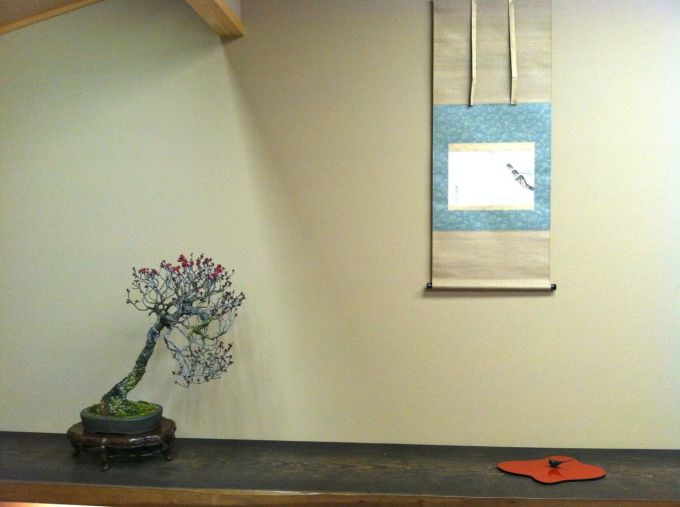 Red ume (hibai) with a scroll of snowy cottage roofs in a village, and a wagtail which is a cheerful bird at this time of year. 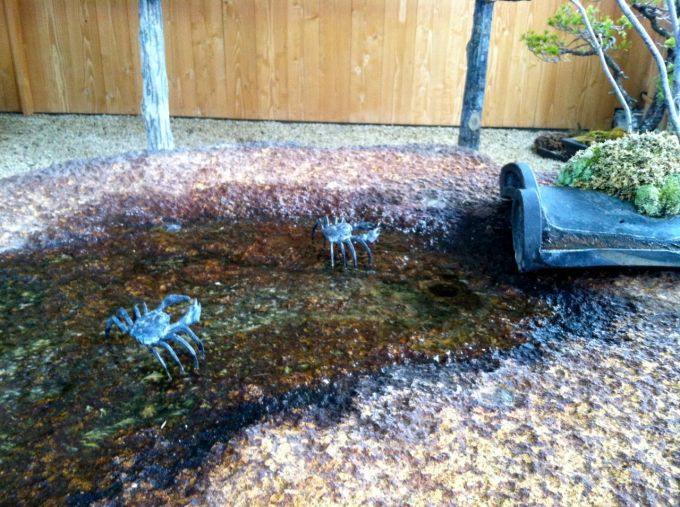 Plant on a tile, with water flowing underneath two crabs… All the rest of these photos are at Suzuki’s  garden in the village of Obuse, rather tucked away from the busyness of the bonsai world on the western part of the main island. Getting there is an event in itself, with a sweet reward. His is a simple garden with lots of space and a feeling of serenity. He built a huge addition onto his garden three years ago. For some reason I did not care for it when I first saw it, to be honest, but it grows on me. I think I was comparing it to the museum he was a curator for when I was a bonsai apprentice there, and that was a busier display area and I was used to seeing his trees in a different setting. Now he’s taken over a big grape orchard in addition the original greenhouse area, and its expansive feeling is a clean backdrop for his evocative trees. 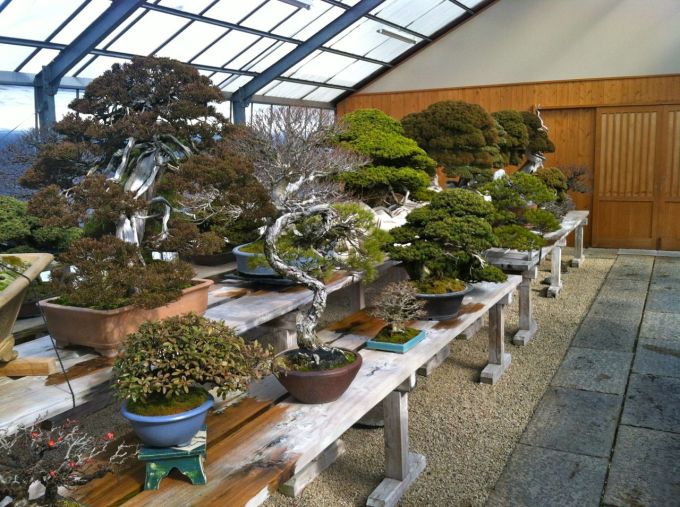 Inside one of Suzuki’s greenhouses. Behind the wooden wall is the display area featured in the previous photos. 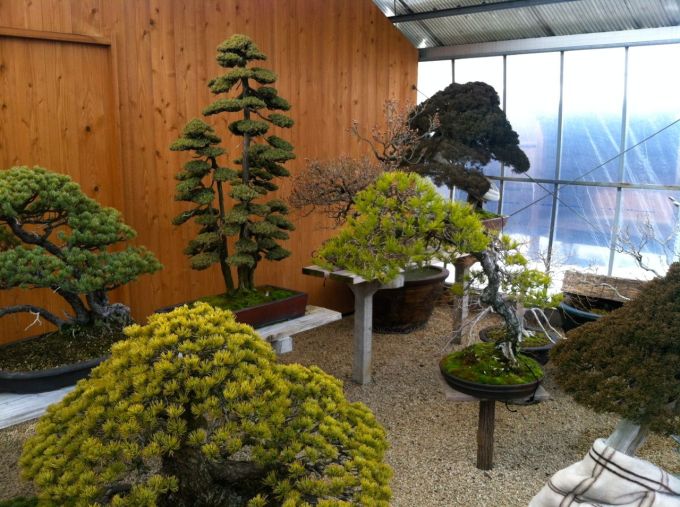 The other side of the same greenhouse, with one of Suzuki’s favorite trees, a bunjin red pine that won a prize at the Sakafu show. He has four big greenhouses in all, which are full of trees in the winter. 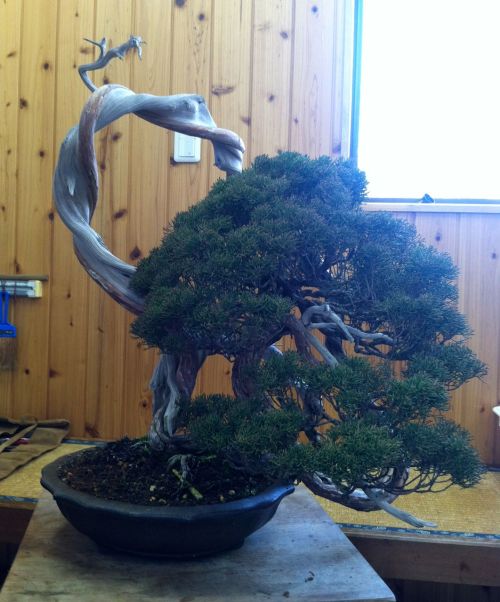 I worked on four trees in the five and a half days I was not shoveling… this was the first. I’ll post the reworked tree in the next post. 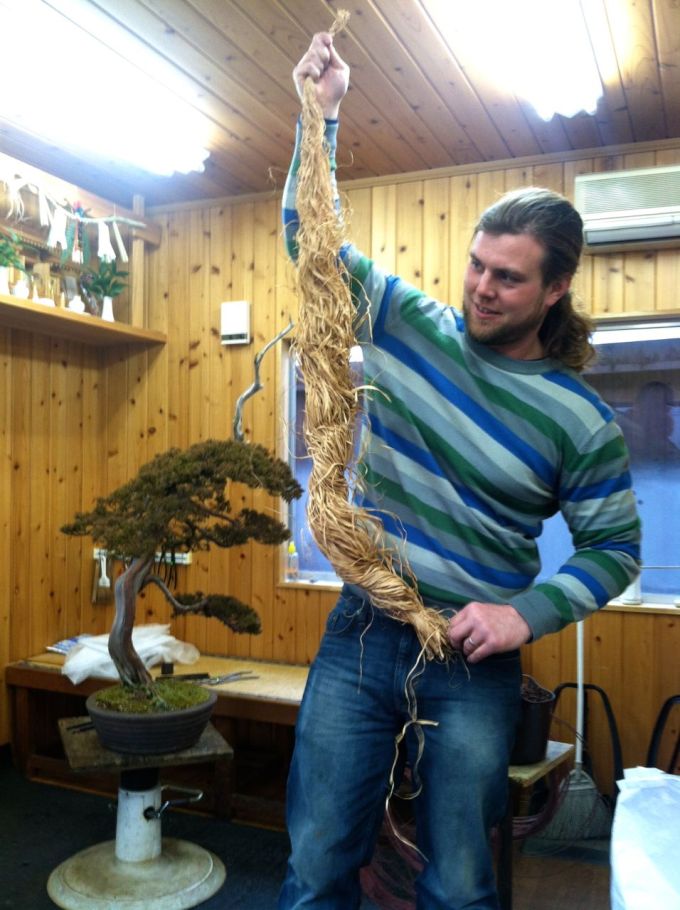 Bobby was there for several days. Here he is getting started on a juniper he was given to work on by Suzuki. Almost the whole time we were working in Obuse Suzuki was at the Kokufu show in Tokyo. More photos from Japan in other posts! Including snow! How exciting. I know. Wait for it.