Posted by crataegus on September 13, 2013 in Uncategorized |16 Comments

The last photograph here needs some explanation, since any use of a ladder and a roof reaches beyond usual bonsai technique… But to tackle the serious ‘middle part’ of this post first, I thought a series of notes about Chojubai might help get to know this little rascal a bit better because it is so little known.

This time we’ll talk about their bark. All Chojubai are not the same. There is not one single genetic out there. Among other differences, Chojubai have different speeds of bark development, from a rough-barked form that develops a corky looking bark within a few years to some that don’t seem to have appreciable checked bark even after twenty. For all of them, however, if we’re growing the tree hard for trunk caliper, then bark will not start forming until we slow things down and have it in a bonsai pot.

The following are a few photos of Chojubai bark:

Twenty-five year old tree with something common to older Chojubai, which is exfoliating bark near the base. The smooth areas are where older bark has flaked off. This is more common on thicker trunked trees. Thinner and multiple trunked trees have less of a tendency to shed bark.

Another older tree, maybe 40 years old, with a lot of bark coming off. To keep the tree strong and blooming well fertilizer is important, but one may wish to limit fertilizer a bit with older trees to minimize bark shedding. 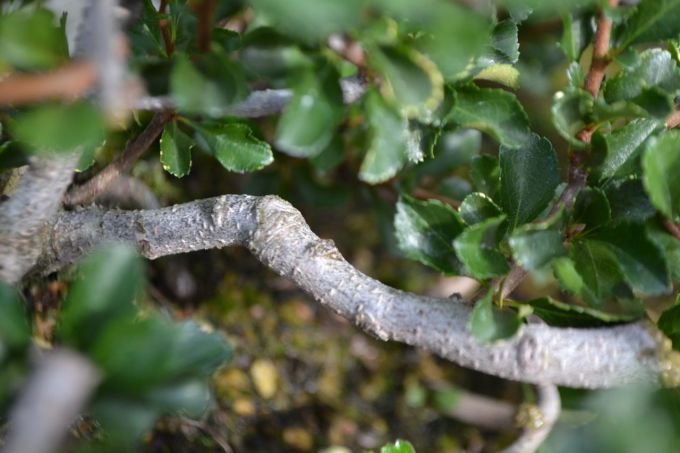 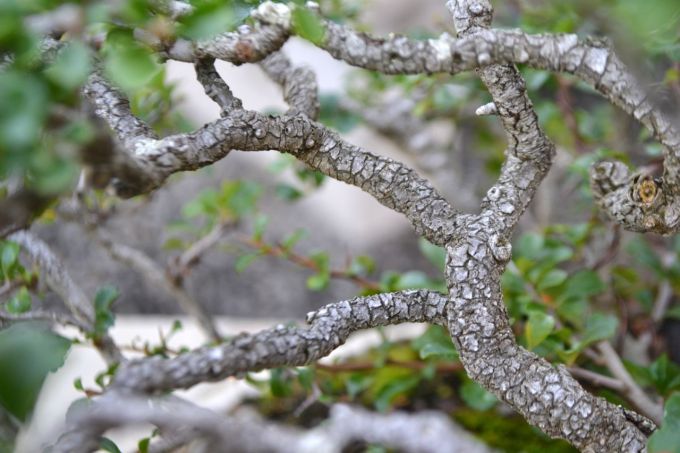 Older branches of about 25 years, with the checked bark that is typical of Chojubai. Other kinds of Japanese Flowering quince, such as Toyonishiki, do not create bark of this nature. On the upper branches of Chojubai checked bark can be maintained for decades as they do not develop in girth very rapidly.

Bobby about to attempt Chojubai Test #349, aka the Chojubai Roof Toss. This experiment was decided on after it seemed impossible to actually damage a Chojubai by physical means, after witnessing a few young branches cracked in half in the spring and they kept growing through a very hot summer without a blink. Hence the Roof Toss to test the outer limits of Chojubai, performance art, bad technique, and bad idea all in one go.