‘This Is The Tree I’ve Had The Longest’

Posted by crataegus on November 6, 2020 in Uncategorized |4 Comments

Anyone with a bonsai garden can point to that one tree that predates all others. For me, it’s a juniper. And that’s the tree that I wish to share today.

The history of this one is memorable for me, collecting it as an Eastern Red Cedar (Juniperus virginiana) on the rocky shores of a lake near Bloomington, Indiana. I was pretty young. Likely in sneakers. And low on collecting experience.

Some may note the odd ‘collected it as’ sentence in the last paragraph. Most things remain what we collect them as, and arguably the lower half of the trunk is still Red Cedar. The top half became a different species in 2002 when I was studying with Boon Manakitivipart. He offered some Kishu juniper (a variety of Shimpaku) for the graft, and after the scion took and grew for a year I cut off all the spiky Red Cedar growth. Only one scion was used.

For years it sat on the bench, mostly ignored. About 5 years ago I brought it into the studio, being a bit embarrassed to have a tree that long with so little to show for it. The current style is due to the intervening years of adding a little information here and there, now and then. Piecemeal and additive is an interesting way to build character in a bonsai. One can work a long time without choosing a front, for one thing. Just adding information. Eventually one view wins out.

The majority of the trunk line was created by wiring, I think the slow bend in the first two inches is all that remains of the original shape. But feeling that the trunk was rather boring, we also created shari. It’s been an example tree for students in how to create a spiraling shari line. Nearly every year since the shari has been widened a bit. Or, plural, THEY are widened a bit. There is a shari on one side, and if you turn it 180 degrees there’s another shari. They revolve around one another like a double helix.

Though it may not be the greatest tree in the yard, the tree we’ve had longest pays its rent with a story, and that story often is a link to our fond beginnings. I’m trying to make sneakers central to this story… 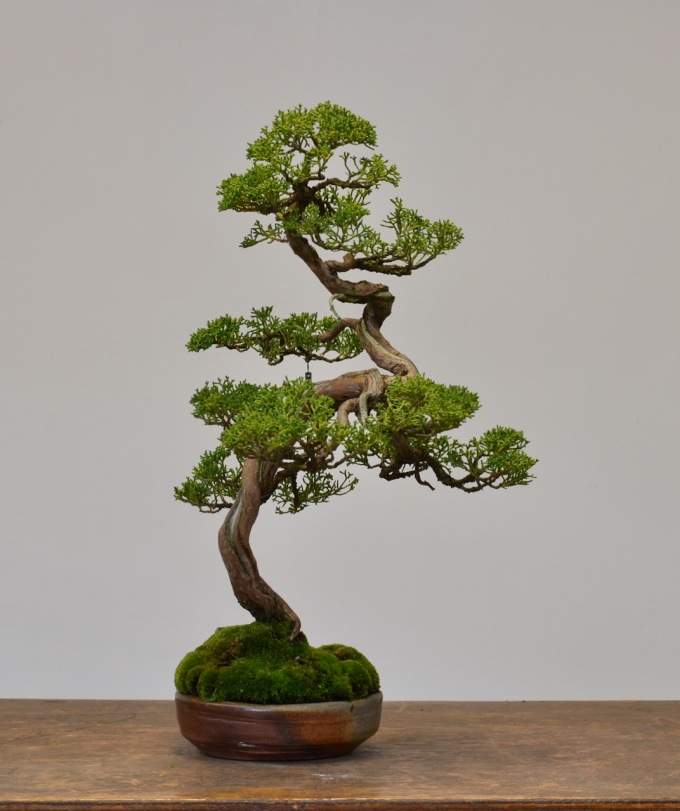 Not my first tree, but the tree I’ve had longest. Not surprisingly perhaps, it’s a juniper. This is a grafted tree, ‘Kishu’ Shimpaku scion on Eastern Red Cedar collected stock. Students created the shari, also wiring the branches over the years, definitely a group effort. 12″ tall, in one of my old wood fired pots.

This shari was created over successive years. We widened it several times, and you can see the new xylem revealed when stripped of phloem, cambium, and bark—the xylem becoming a roll of deadwood. Eventually, with a bit of patience and building information in layers, creating rather believable, old-looking shari is possible. Incidentally near the top of this photo is where the graft was. There’s no obvious bulge or other indication of a transition from Eastern Red Cedar (Juniperus virginiana) to Kishu Shimpaku (Juniperus chinensis ‘Kishu’).