Posted by crataegus on August 7, 2019 in Uncategorized |11 Comments

It’s summer and our single flush pines have stopped growing. What now?

For starters we can clean out old needles. While we’re doing this we may notice that some year’s needles are longer than others. This post ends with a few reasons they might be longer and how to plan for the future. 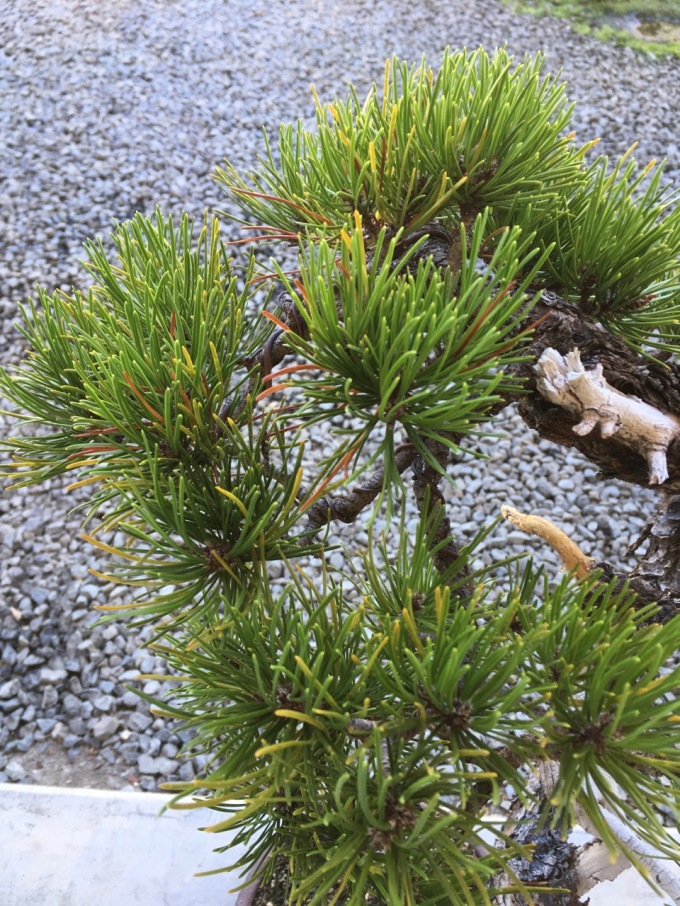 A Shore Pine with some browning and yellowing older needles. These are the third year needles (the juniors).

The removed needles. The large group on top are the old needles, starting to yellow. They were loose and easy to pull off, even though many were still a bit green. The bottom group, the smaller, greener group, were the needles pulled off purely for aesthetic reasons, the dangling ones below the foliar pads. These were mostly second year needles…the sophomores…but more on these shortly.

The tree without three year old needles. Last year’s and this year’s needles remain on the tree. Unless very full, most pines we use for bonsai will want to retain their second year needles. Some second year needle thinning can bring more budding, which is the tree’s response to this, bringing further ramification. Be sure you have a strong tree before doing that, though, and concentrate on taking off some needles on the strong shoots only. If you decide to skip this, at the very least take off the ones that are easy to pull off.

Determining which needles are of which year can be tricky—but looking closely at needle length, needle color, and clumping on the branchlet can help.

Notice that in the smaller pile of needles above (the second year needles) the needles are shorter. Several things can cause needles be shorter:

Of these the only one we can’t easily control is abundant spring rains. Those rains can make one’s single flush needles grow twice as long in some years.

Shorter needle length gives us a more compact, in-scale tree. As one takes old needles off in the summer routine, take note of how long they are. In comparing their lengths to past years and past care practices one might find a better plan to limit the length of needles for single flush pines the following spring.