There and Back Again with a Cryptomeria-

Any visit to Japan where remote temples are on the menu will usually involve Cryptomeria. These stately forest trees remind one of miniature redwoods, standing bolt upright as if on review.

The Cryptomeria featured here is a home-grown bonsai from nursery stock, not an import. It was first styled by Harunobu Tokita in California. The first photo starts the legacy of this tree that lived for a long time in Boon Manakitivipart’s garden as a unique formal upright only rarely seen in the United States. I recall it well when I studied with Boon before moving to Japan. 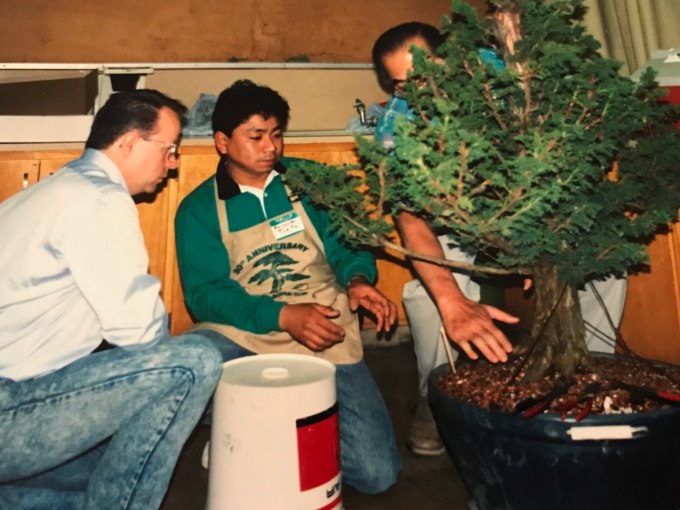 At the first Cryptomeria styling with Mr. Harunobu Tokita, behind the tree, and the original owner Morten Wellhaven to the left. Circa 1990.

Rough styling done, and in a bonsai container 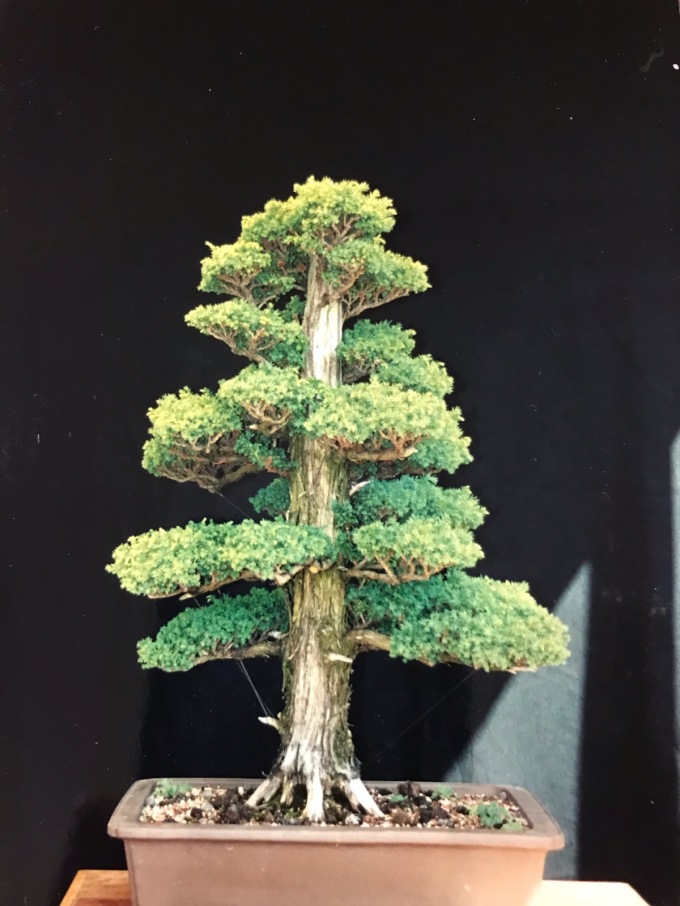 Further along in the development of the tree, the ‘fingers’ beginning to show in the branch work. And in another pot too. The tree is still in Boon’s yard at this point.

July 2012. Here the tree has relocated to southern California, and is in its third pot. Eventually we’ll run out of pots but not quite yet.

We had a setback. Fungus took over the tree and killed foliage and small branches before it was reined in.

July 2013. Browning foliage is from a fungal attack that took over and greatly limited any thoughts of aesthetics for few years.

Though we were able to control the disease with fungicides the tree still had trouble regaining a strong foothold. It was eventually shipped north from California to my garden in Oregon, which assisted in reinvigorating the plant by virtue of a more appropriate climate. (Spoiler alert: A chapter on the intricacies of climate and growth will be in my forthcoming book Bonsai Heresy.)

Decisions like this are hard. My client willingly and at his own suggestion asked me to take this tree north where we hoped the tree would be able to shake off its malaise. Though he would no longer see the tree daily and take pleasure in its presence, he couldn’t bear the thought that it was doing poorly and remained so far from its potential. And there was a very real chance it could die.

And finally back in business, July 2019. When I sent this photo to my client he texted back ‘The Return of the King!’

For some time we let the tree grow freely. The small brown spots show where larger than normal shoots were cut off to bring the tree back into silhouette following years of only piecemeal trimming. The pot has been changed (yet again) to an unusual Chinese antique. This year we repositioned the lower front branch to the right so it’s not squarely in the front of the trunk. Though it’s mostly recovered from the fungal attack, a few more details still need to develop, such as crown density.

*This large Cryptomeria is being shown at the Portland Japanese Garden through November 2019—please check it out in person in the more hidden upper bonsai terrace, not the lower one.