Thoughts about Bonsai in Taiwan-

Posted by crataegus on November 16, 2017 in Development, Shows |5 Comments

As I walked about the premier bonsai show in Taiwan, several things fell into place. Firstly, it was apparent why the Japanese thought so highly of Taiwanese bonsai. They don’t feel that way of many places, South Korea is one of the few others. By the time I’d finished walking the show, I’d decided that the Taiwanese did deciduous and juniper as well as the Japanese. The broadleaved evergreens were actually better than the Japanese. And the pines…they were a bit lacking in detail, not quite as good. Overall, while Japan may be said to lead with their pines, in terms of a stylistic crowning achievement, for the Taiwanese it was the broadleaved evergreens: starting with their the Ficus, but impressively followed by the Premna, Buxus, and Eurya.

One artist that gave a talk in Taiwan, at the ‘Science for Bonsai Symposium’, made a particular impression on me. For several reasons, I’d like to share some images of Mr. Min Hsuan Lo’s work that he presented there, and discuss the quality I found in them. 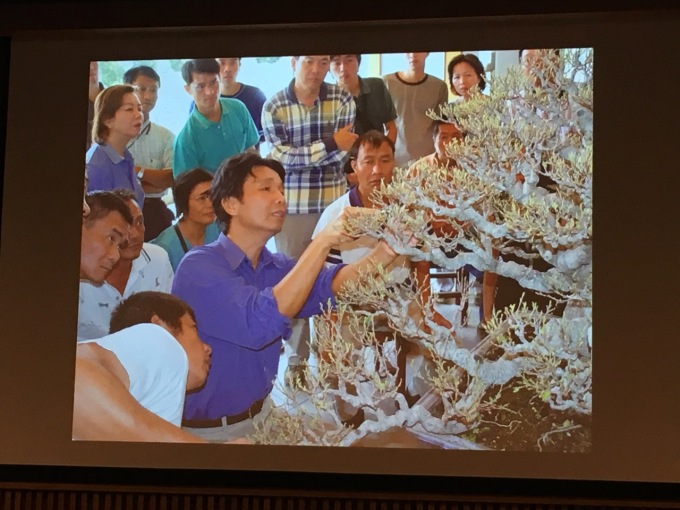 Mr. Lo teaching. (Apologies for the quality of these photos, they were taken of a projection from 30 feet away.)

Mr. Min Hsuan Lo is a bonsai artist from Taiwan who is quite well known overseas. He has been working with Ficus for decades, so many in fact that he divided up his portfolio into several parts, and explained the progression and his thinking behind his work. And he’s very funny, he had everyone in stitches.

Years ago he was inspired by one particular old Ficus tree on the campus of a University. He noticed that the long, dropping lower branches eventually rose at their ends, and copied this idea to his bonsai. He is one of the first people I’ve ever seen do this so intentionally. What is going on with those rising lower branches, why they didn’t simply die off on the older trees he saw, has everything to do with the physiology of sugar and auxin. (And if you’re curious about what that’s about, please look into the video course I made with Bonsai Empire, the Fundamentals Course.) 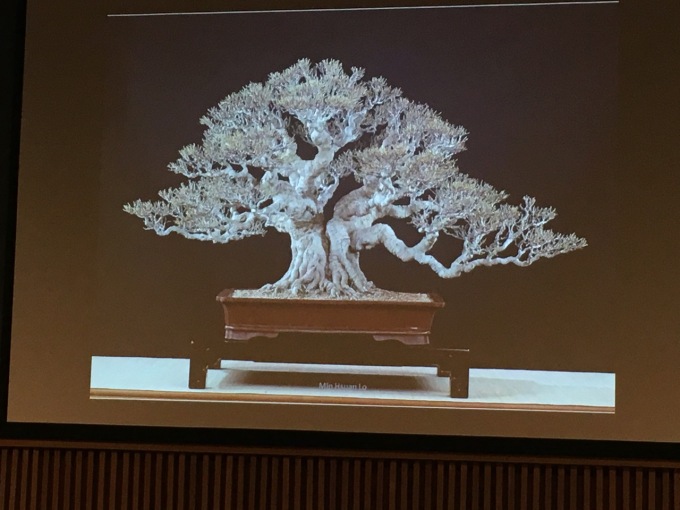 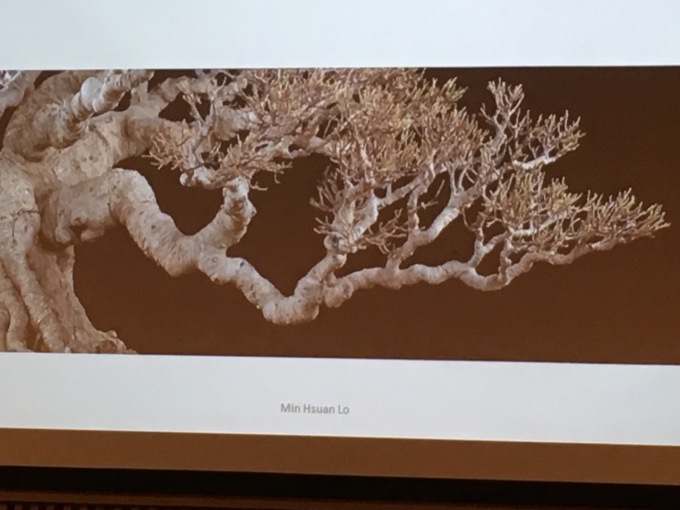 Take a moment to notice and reflect on the naturalness of what Mr. Lo has come up with 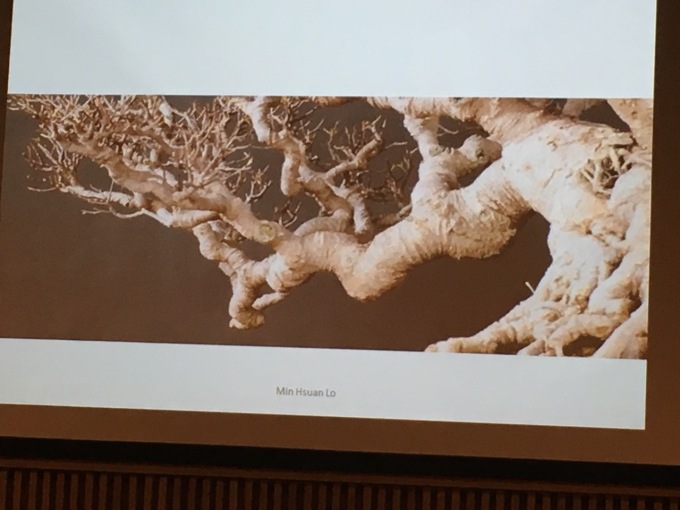 Another point I wish to make is about time and work. The tropics and subtropics certainly grow bonsai very fast. And yet when you look at the development of these branches, it’s not time that comes to mind, it’s work. This took a lot of labor to create. Look carefully at the taper and the subtle changes of direction in the branches. This is brilliant, careful, non-hurried activity. It is the kind of work that I try to impress on my Seasonal Students, and that I write about briefly in the Philosophy page. With it you build quality into a bonsai from early on, and if it’s not done, will never have it. Kudos to Mr. Lo for his inspirational patience and attention to natural beauty.