Posted by crataegus on March 29, 2016 in Uncategorized |31 Comments

We often think of cliff or rock faces being the place where cascade bonsai get their inspiration. And they do. But there’s another commonly seen growth habit in those steep, rocky areas…

I collected this Western Hemlock (Tsuga heterophylla) on Vancouver Island several years ago, where, coincidentally, it was growing off a boulder. The leaves were tiny and yellow from the water and nutrition stresses of boulder life. In less than a year it had rebounded and was growing green and vigorous.

The lace rock used in this experiment was purchased without an intention in mind, driven only by the impulse of ‘What a cool looking rock, maybe I’ll use that someday…’ It had several possible inclinations, one of which proved useful for this composition. And so last Thursday turned out to be ‘someday.’

This is what we started with…a chunk of lace rock and a Western Hemlock. 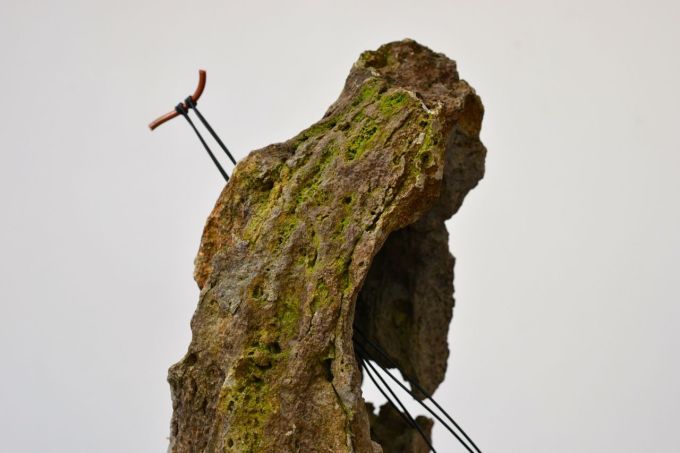 For the attachment to the rock we didn’t need to drill a hole, or glue or cement wires on…the lace rock had a very convenient hole in the back of it, from the gas bubbles in the rock when it was made, before it cooled.

Dismantling the box of the Hemlock. It had such a strange root ball and the trunk was growing in such a curious way that I needed to get inventive with the box building…

Preparing and reducing the roots to fit into the rock cavity with Andrew Robson, who will be starting an apprenticeship here in June.

Apprentice Bobby Curttright and I continuing to size the root ball to the rock cavity. 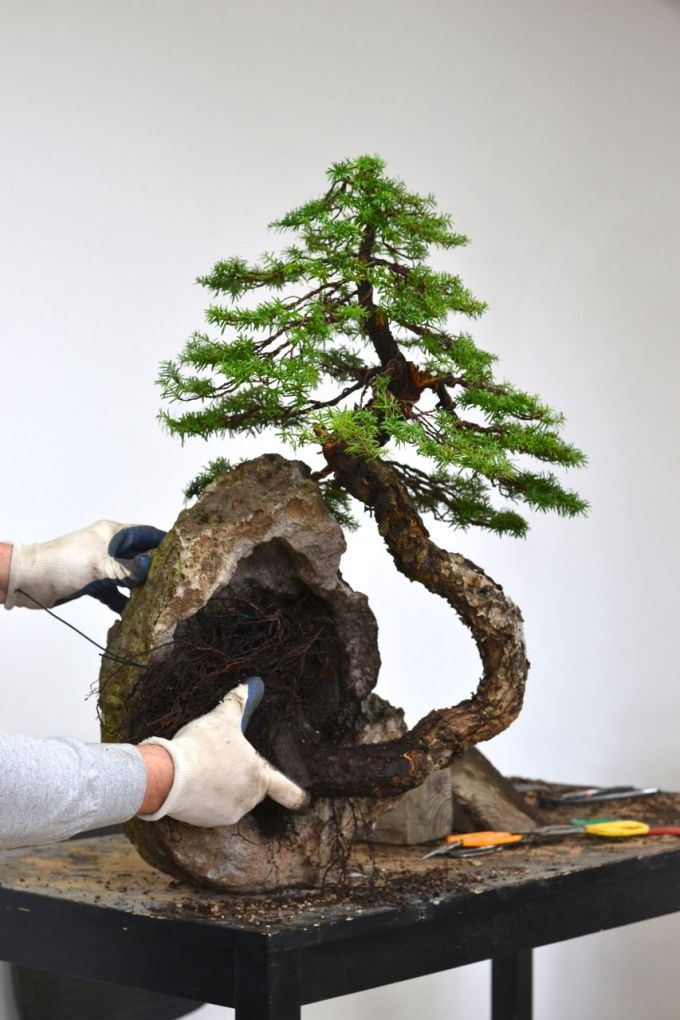 Our approximation of the relationship between rock and tree. Many of the trees growing off cliffs do not cascade down, but grow up, as suggested by this orientation.

View of the inside of the cavity. We had to drill a few holes in the bottom for drainage. A layer of larger size pumice is underneath this soil mix. 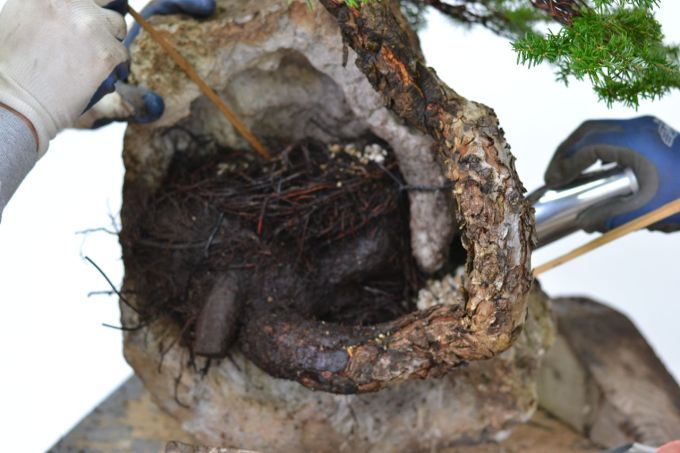 Working soil in between the rock and the rootball.

Our ‘pocket bonsai’… One thing we’ll be keeping an eye on is soil pH, as lace rock might be a bit alkaline. The Hemlock won’t like that much, but we do use a slightly acidified water here in general, and that might be enough to keep it happy. If not we’ll have to get inventive and use a more acidic water source.

The first watering done with very soft rains of the nozzle, the planting being prone to erosion before the establishment of moss. 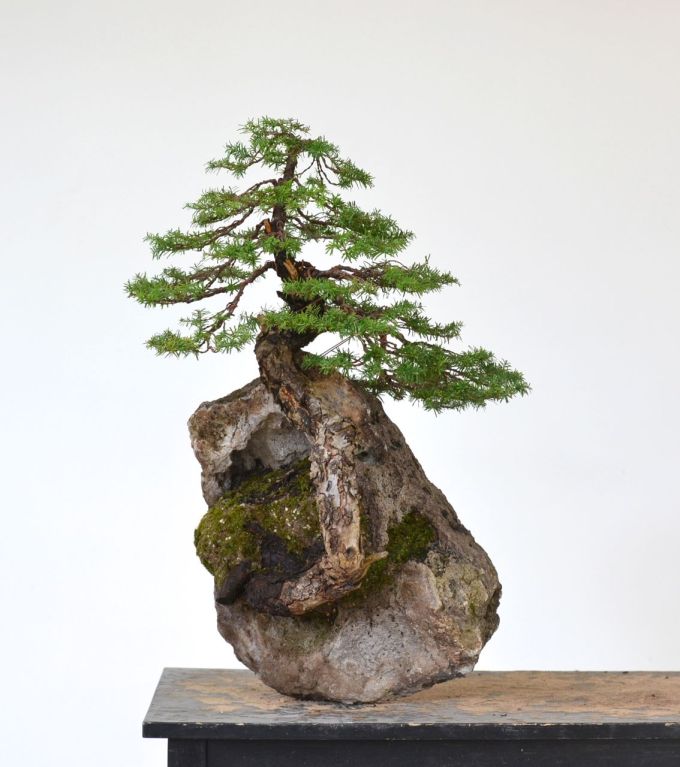 The first of a four-photo rotation around the rock planting, ending with our preferred front. 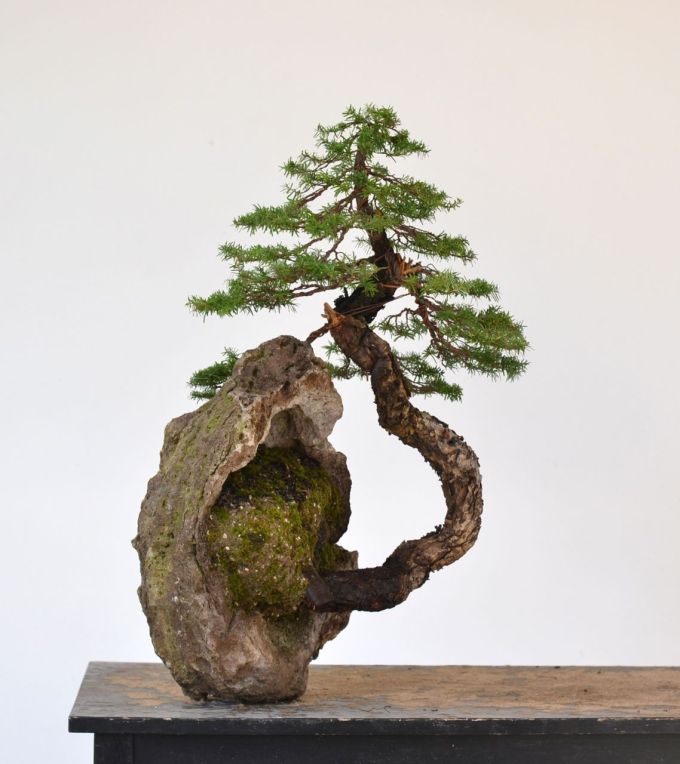 This is our front, tree height 24″ / 61 cm. There are a lot of lava flows in the Cascade Range here where the Western Hemlock lives, and lace rock is an igneous/volcanic rock, so there is some alignment there. The curious thing I’ve noticed about trees growing in this upright manner, off a cliff or other steep incline, is that they are not always the oldest trees in the area. The oldest trees are often on top of the rocky breaks, often just a few hundred feet higher up, where things are not crashing down on top of them, or slope erosion doesn’t take the tree down with it. So the styling of this tree, with a fairly small crown and many branches suggesting a mature tree but not ancient, makes some sense to me. Hope you enjoyed our experiment!