Time to Decandle your Black Pines-

Those pines that can be de-candled (de-shooted, de-foliaged—chose your favorite term) include Japanese Black pine, Japanese Red pine and a few of the less often decandled but sometimes very vigorous trees like Scots and Pitch pine.

It’s nearly the last week or two for decandling in many temperate zones in the Northern Hemisphere. Here in Oregon, USA, I’m at a high latitude and must decandle early, so I did it last week. Those in lower latitudes may be waiting another week or two or three so that the regrowth does not have long needles. The longer the growing season, the longer we wait to decandle. Those in the Southern Hemisphere will be doing this six months from now.

Although I won’t go into an exhaustive program of what to do—there are so many ways  of decandling, each for a slightly different purpose, and there’s a lot of detail to it—but I will show one tree here that I’ve shown before, just for continuity and to see how it’s developed over the last few years. It’s a ponderosa pine that I grafted black pine onto back in 2003, (just six months before my ridiculous adventure as an apprentice in Japan). The tree has now been grafted for about 10 years. Several of those years it just grew and so it’s really a bit behind in what could have been done, but—I discovered— it’s hard to cut candles when 7,000 miles away. My scissors are only 7″ long. 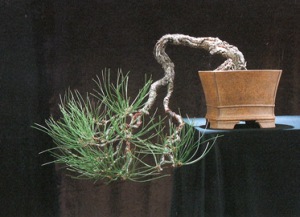 A trip down memory lane for those who’ve been following this blog for a bit, here’s the original pine, a ponderosa. Tree was collected by Andy Smith and I remember trading a pot for it at my very first convention in 1992. This photo is from around 2000. 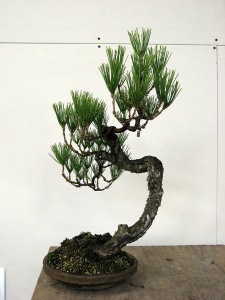 Styled and potted at a different inclination.

We decandle the very vigorous species of pine for some good reasons. It helps us to:

I have found that candle cutting is the same on Ponderosa pines grafted with black as just Black pine on its own roots. Here’s a few photos showing decandling of this small tree in a few steps: 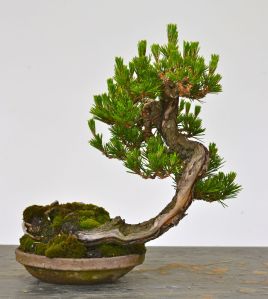 Ponderosa/black pine in 2013 (a week ago), after a couple of years of decandling. Some moderation of energy is happening.

What I did last week: The first part of decandling is pulling off the older needles and leaving a whorl around each candle. This shoot was on the bottom of the tree, so I left more pairs of needles than the top. I left 7 pairs on this shoot. Approximately… each decision is based on the strength of the shoot next to it, too. 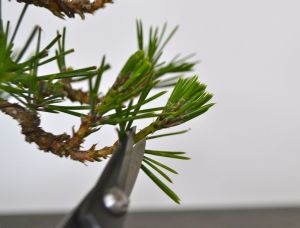 …after taking old needles off, the candle is cut… and where it is cut is also important. A shorter stub will strengthen a shoot, a longer stub will weaken it a bit.

The pine after an hour of work.  12″ high. It looks very sparse, as most decandled pines do. In the fall it should look nice and full again, with multiple shoots having regrown and with—hopefully—short needles in scale with this small tree, and yet not too short that would look weird and weaken the tree.

Please only attempt these techniques on a strong tree…and then watch that you don’t overwater a recently decandled pine as their water needs will drop quite a bit.

* For more info on the details of decandling, I recommend my friend Jonas Dupuichs’ blog, Bonsai Tonight. He’s got some great images there and explains it simply and very well. In the ‘Search’ field type ‘decandling’ and a large number of posts come up that can handle many puzzling questions you might have. I hope this is not passing the buck…I admire Jonas’ blog and think rehashing what has already been done so well is simply daft, and I do enough daft things in life to get redundant. If you’ve questions, I’d certainly be glad to help/confuse you as best I can.