Mountain Hemlock On Levitated Nylon Board

Yes, that is the correct headline… bonsai on plastic. I wasn’t too sure of it myself.

In the late summer of 2010 I collected this Mountain Hemlock, Tsuga mertensiana, with my friend Anton Nijhuis in Canada, and potted it in a strange box that was sort of cantilevered up because the tree had been prostrate, growing through the mosses on bedrock. Digging through the moss uncovered a rather curious twin-trunk base that seemed like it would have to be styled in an unorthodox way, so naturally I wanted it. A year and a half later the box was full of roots, and the time seemed right to complete this weird idea of mine.

I’ve always wondered about alternatives to stone and prefab slabs. They tend to crack or break just when a show is just being set up; their timing is truly impeccable. Also, a bit ironic given that I used to be a potter, I’ve been drawn to the idea of making nearly invisible platforms, in place of a ceramic container. In other words, something supporting the tree that is really not an element in its presentation. So the idea of an inconspicuous, impervious, strong support had me pondering for a while.

Like many of my creative endeavors, I quiz everyone I know. ‘So, I have this idea… how would you do this if you wanted to do that?’ And you end up with a collage of ideas that you edit and orchestrate into a complete vision, sort of like an orchestra conductor or movie director must do I suppose. With an assortment of weird tools, bolts and ideas the March Seasonal students and I spent more than a day cobbling the thing together, and it was great fun—- Thanks Roger, Gary, John and Konnor! 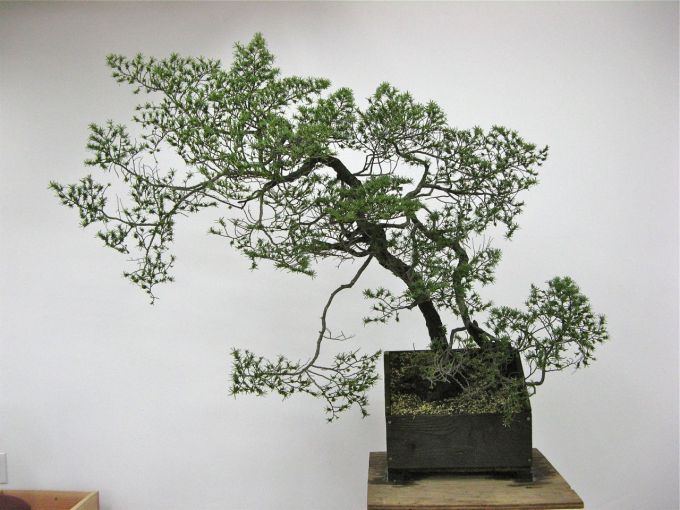 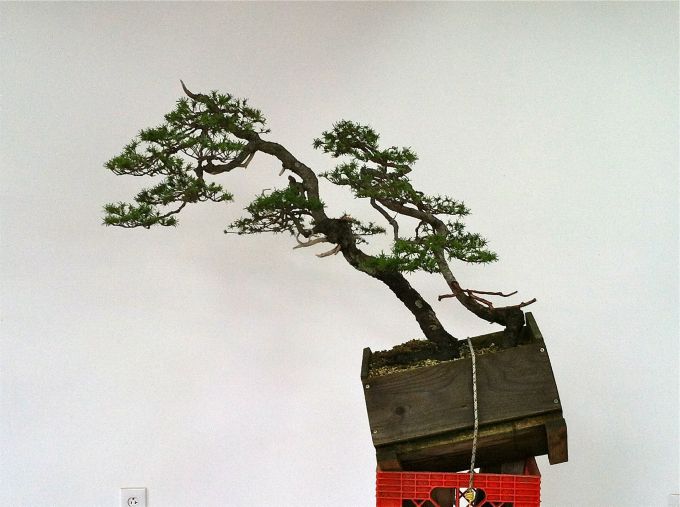 Styled, but before the potting experiment… 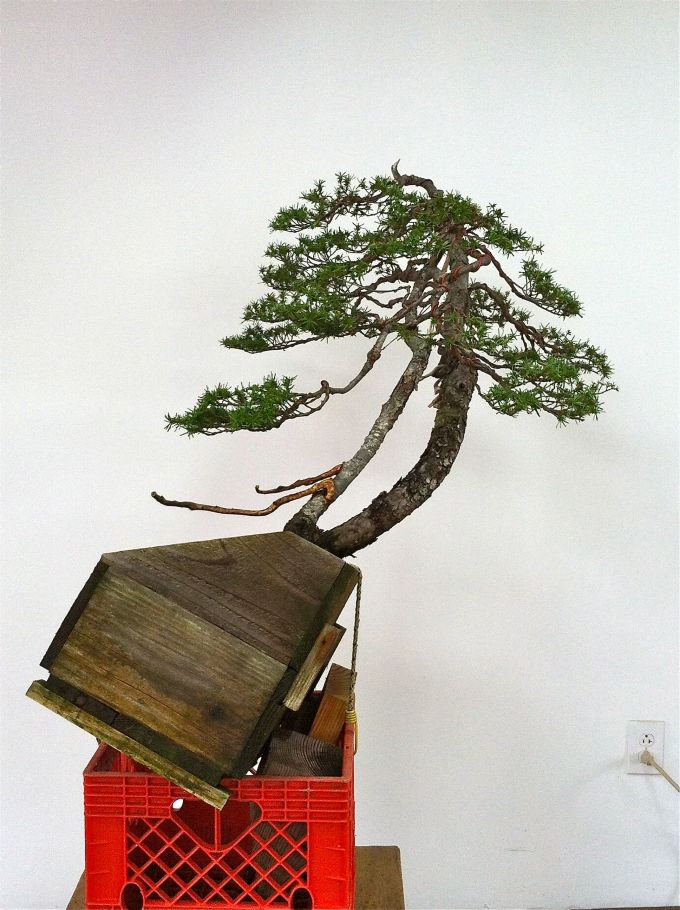 Right side view—tree swoops far to the rear before coming forward. 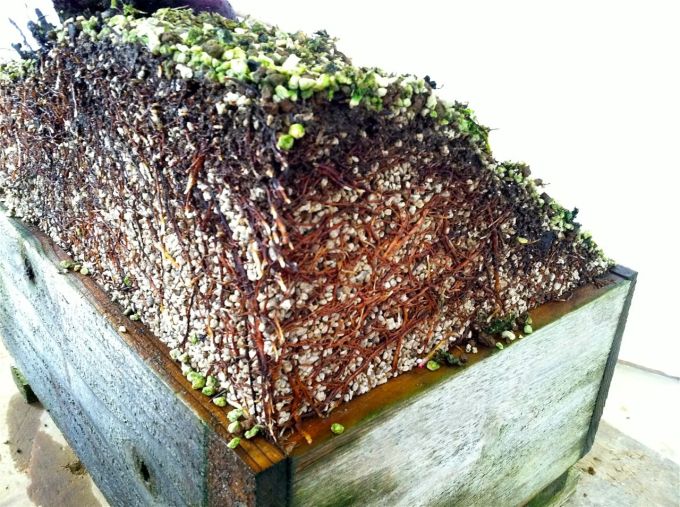 A full box of roots in 100% pumice, one and a half years from collection. 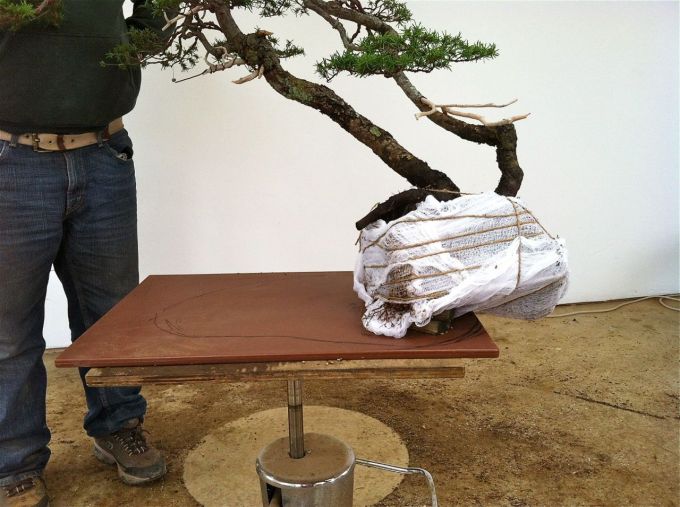 Tree out of the box in position on the nylon board, with a sketch of the platform design in ink. The fragile rootball is held together with cheesecloth. Lots of moving around at this point with an unwrapped rootball would have destroyed it. Gary or Roger’s legs, I think… sorry guys, I am not attentive enough to identify your boots or belts. Thanks to both of you, though! There was a fair bit of holding things in position that day. 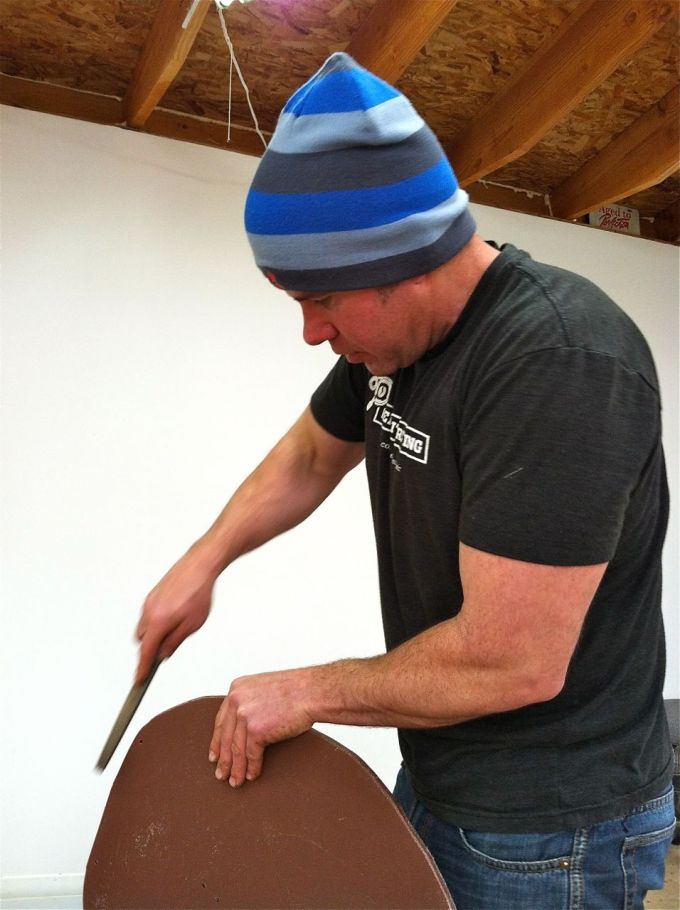 Konnor Jenson, my intrepid periodic apprentice, filing the edges of the board. Sporting a knit hat, he looks like a diehard Portlander- 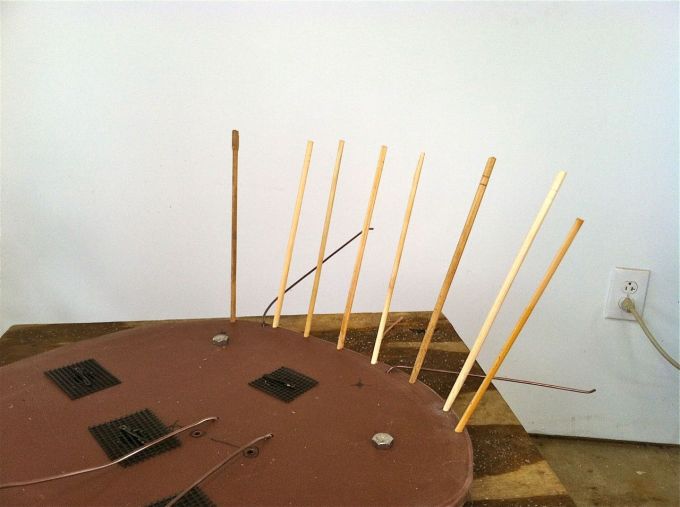 The plan to hold the leaning muck wall in place. We did not take a shot of the twine that we wove between the chopsticks, offering a bit more support. The bolt heads you see are the top side of our levitation idea, with round end caps underneath serving as inset ‘legs’. 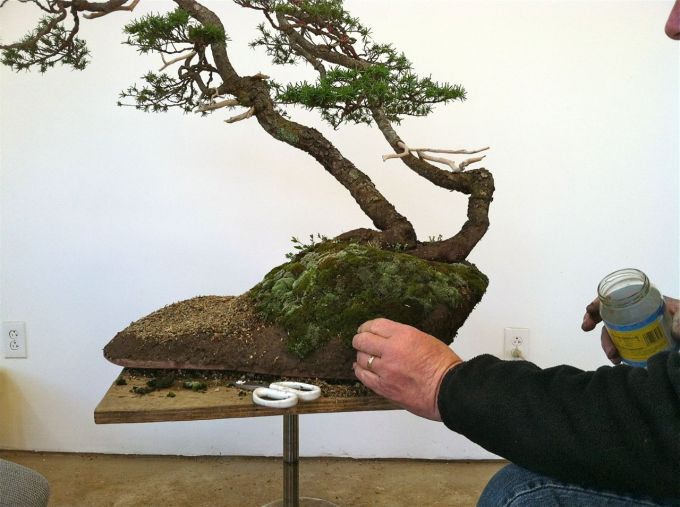 Mossing the surface; disembodied nose courtesy John Kahlie. He passed the mossing test with flying colors and will be relieved to move on to lichen in the next Seasonal… (Just kidding, John…) 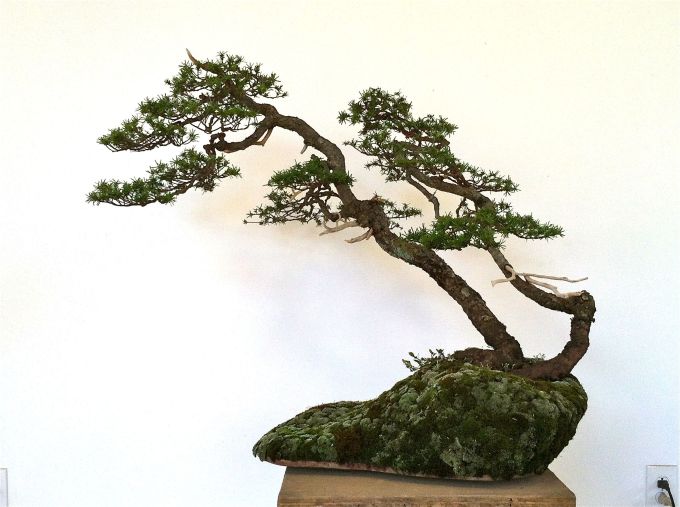 The final design. The small accent plants near the base are heather and a curious evergreen penstemon, for those interested in the smaller elements. The moss may eventually grow over the edge of the platform, hiding it, at least that is the hope. This tree had an odd bend in the right smaller trunk, and I thought the addition of a cantilevered wall on the right side would marry well with that, sort of like a second bad note hit in a jazz piece that you think, ‘Huh, that guy must have intended that, so maybe it works.’ Opinions? Please let me know. In any event, this tree needs filling out a bit. The buds are swelling well in my greenhouse and it will be in there another month. 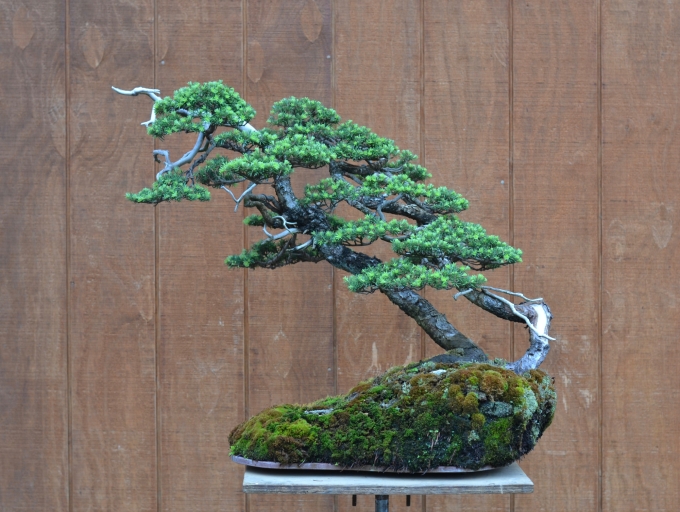 And an updated photo of the hemlock, after a few years’ growth.