Posted by crataegus on November 6, 2010 in Uncategorized |13 Comments

Some of you may have been following the development of this Japanese Maple. I just took the brilliant red leaves off yesterday; we’ve had a lot of sun here in Portland and they did not last longer than 1 1/2 weeks. But it was a beautiful fall.

In any event, the small trunk to the right—which was originally an airlayer of a branch from this tree—has grown well and feels well ‘locked’ into the nebari. The nebari is bigger than it looks, it is just covered at present with soil to establish the young trunk. I’ve been piling cake fertilizer near it to stimulate the fine feeder roots that are the ones that fuse into a solid mass eventually. The upper roots were so active that they were growing right up into the cakes. I had to literally cut off the fertilizer balls yesterday.

One of the downsides of this higher rate of fertilizing is that the apex of the tree gets stronger, so I removed leaves in the top part of the tree during the growing season. It will take a couple years before this tree settles down again, but we did need that strength to fuse the smaller trunk in. The roots were so active that the tree has risen almost half an inch in the pot since this spring.

I will be repotting the tree next year, and the two photos here show the new front I’m thinking about for it. The shift is subtle, but that small difference allows an arc to the trunk that supports the flow of the tree to the right. Also, the branches are more interesting from this new view, and the small trunk pushes to the rear…which is not textbook for a parent/child style, but at least it is not a flat tree.

The small trunk was left to grow wild this year. Next year some light wiring will direct the branches and a main leader will be selected.

This is the tree 1 1/2 years ago, in January 2009. The lowest right branch was air-layered off and is now the small trunk seen in the photos below, as a secondary trunk. 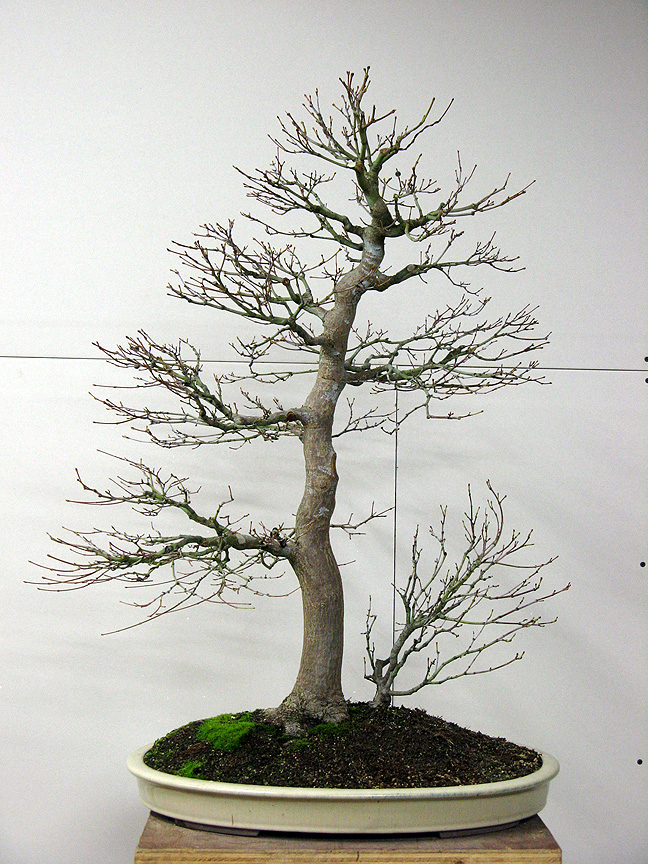