Of Weeds and Love

Posted by crataegus on June 24, 2018 in Uncategorized |5 Comments

‘When one summer I came across Emerson’s argument that “weeds” (just then strangling my annuals) were nothing more than a defect of my perception, I felt a certain cognitive dissonance.’

These are the words of Michael Pollan in his hilarious work Second Nature. The dismissive words of Emerson in the garden are not unlike the bonsai grower who prefers the natural approach.

It’s hard not to read Pollan and laugh (author of the excellent Botany of Desire among others). A defect of our perception? That weeds might be beneficial or at worst benign to our experience of bonsai…that is a bit of a stretch and I’ll side with Pollan on this issue, for it relates to bonsai just as well.

With bonsai the invasion of a weed is as problematic as one in the garden. It takes nutrition and water. It looks bad. Both of those are small problems that become big problems when the weed gains momentum. Soon the bonsai may seem small in comparison to the weed and we have a dissonance of a different order. 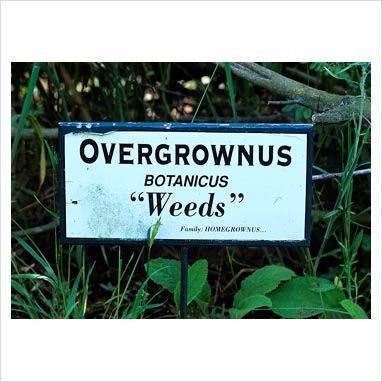 We are familiar with the bold mustards that raise a coccoon-like pod after flowering only to explode and scatter the seeds far and wide. Or the intractable Irish moss that is actually sold in nurseries as stepables for use between stone flagging (and is not a moss). Dandelions are less a problem than oxalis, those clover-like plants with runners and tenacious roots that seem attached to our soil screens far below, or tangled in the roots of our bonsai. Evict these early and avoid hours of muttered spicy curses later on.

Weeding with fingers is certainly possible for some of the long stemmed upstarts, though the seasoned campaigner will often swear by curved tweezers with a good set of teeth on them. This tool will more often get the root out where fingers merely emphasize which weeds have a perennial root system.

As apprentices in Japan not only did we have our cleaning/weeding times but while watering if there was an easy grab on a weed we’d take the half second to pull it. If you stay on top of a problem like this (and we are going to call weeds a problem, right?) it really does make for more relaxed overall maintenance.

Note: Kusa, the Japanese word for weed, is commonly known as ‘accent plant’ or ‘companion plant’, and is another subject entirely. There in the accent pots weeds might indeed be loved nearly unconditionally and find sanctuary from the weed puller’s fingers.