Posted by crataegus on May 30, 2011 in Uncategorized |5 Comments

The words ‘companion’ and ‘accent’ are used interchangeably to indicate a plant or object used in bonsai display. Last year I made a post of several in my backyard… https://crataegus.com/2010/05/13/accents/

…and here are a few more.

I have been heavily focused on Northwest native perennials since moving to Portland, Oregon. Part of the reason is that many of the nursery offerings seem a bit gaudy to me, not quite the austere, honest look we try to find in all our bonsai and in their accessories. (I made one exception here with a purple columbine, a genus which I have a weakness for… my purple one is a double-flowered variety, and doubtless the result of some savvy breeding.)

Some months of the year I’m as easily excited about accents as the bonsai. One of the curiosities of accents is that depending on how the perennial grows that year, or is trimmed, or simply flowers that week, the front of it changes.

Hawkweed is an easily-flowered, all too easily propagated plant. It seeds in pots so readily that one has to be very careful to pluck off the flowers when finished blooming or it will take over quite happily in pots where it is not wanted. This species of hawkweed is not native to the Northwest, but it has a nice, freely flowering yellow bloom. This one is joined with a small red columbine which blooms in summer. The hexagonal pot is from my days as a potter.

An evergreen penstemon from Washington, planted on chunk of lava.

This saxifrage came along as an unseen small plant when I lifted a patch of moss and licorice fern. It was the fern I was after. Two years later the saxifrage has taken over and the fern diminished to tiny little leaves. Sometimes it's not worth fighting success. The pot is a metal half-sphere with no drainage holes. A case could be made that I have no idea what I'm doing. 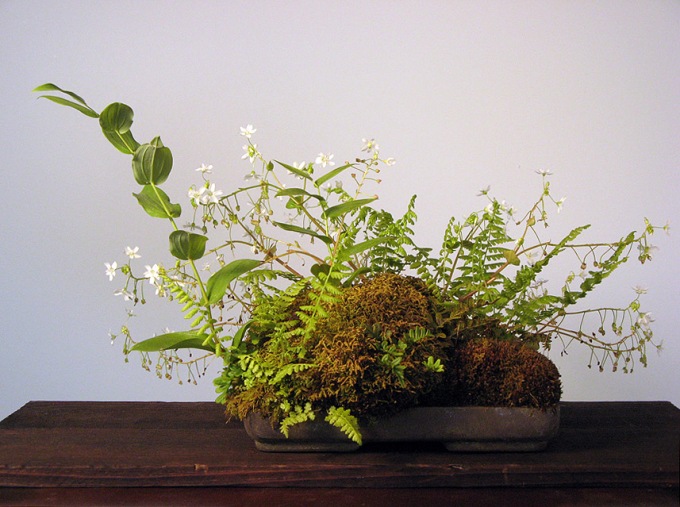 This composition is, like a few of my favorites, not composed by me. I took a chunk of bark that had moss and hints of several other things growing on it, and potted it up. The next spring I discovered False Solomon's Seal (left), Miner's Lettuce (white flower), and two species of fern growing in the moss. I like letting it grow with some abandon. 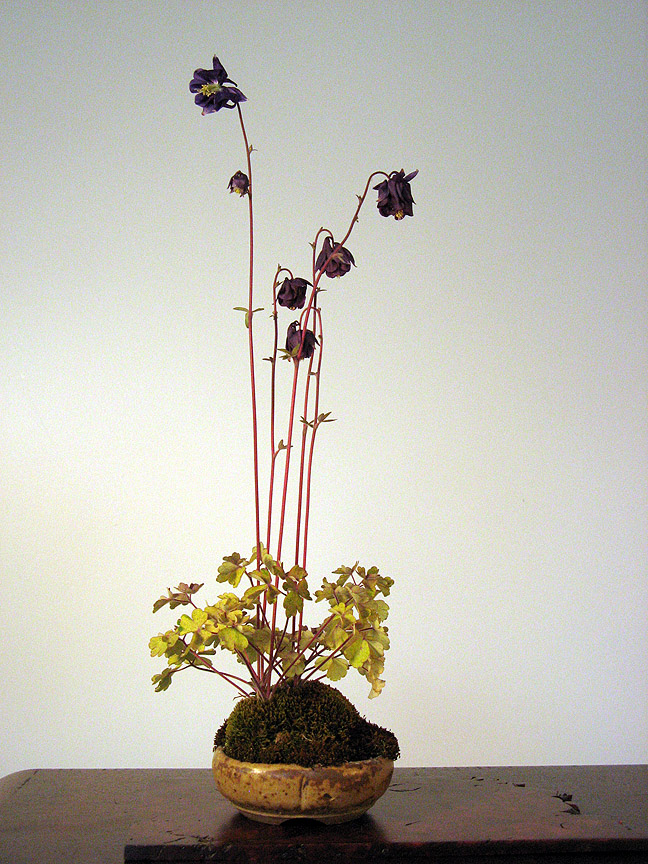 Double-flowered purple columbine, from seed. I prefer the natives for display as they are less showy, but this is hard to resist having on the benches... Another of my pots. The leaves have reduced by half in three years.