Posted by crataegus on April 27, 2011 in Shows, Uncategorized |7 Comments

Something I’m very excited about these days is the beginning of a fledgling professional bonsai community here in Portland, Oregon, which is just stretching its wings. In addition to myself we have Ryan Neil who came back from Japan in 2010 and has already made a spectacular start with headlining at the Noelanders event in Belgium, has taught in Italy, and—I’m happy to report—has settled in the Portland area. When we were apprentices in Japan we joked one night on the phone about creating an Omiya village in Portland, after our terms of indentured servitude were finished. I think after talking we both pondered that a bit, and found it to be not such a dumb idea.

And it appears to be happening: Matt Reel will also be joining us in a year or so, following his almost 5 years now with Shinji Suzuki. We will have several bonsai artists in one city who’ve done significant time in Japan under a couple of its finest masters, Masahiko Kimura and Shinji Suzuki, working together to create a viable professional community and outreach. We hope you’ll stay tuned for the events we will have in the near future! It’s going to be an exciting future here in Portland… and we hope you’ll come visit, and return—

Below are some photos of our ‘traveling’ version of the Portland Bonsai Village… I think Ryan and I figured out that the next three years has us headlining at a convention together at least once a year. Next one: PNBA in Seattle this September! 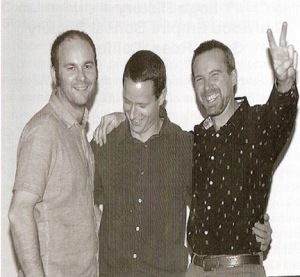